Teopoli is the privileged place of the United Society, where individually and communally we breathe in a divine atmosphere. The name itself, derived from two Greek words, “Theos” + “Polis”, City of God, reveals to us the nature and purpose of Teopoli.

The hopes, the dreams and the wishes of The United Society, we would like to put in practice at Teopoli.  Here, in the City of God, we would like to live our lives to the fullest as sons and daughters of God, calling ourselves Brothers and Sisters.  Here we pray with the purpose of reaching spiritual union with Jesus so that we may live in Peace, Love, and Unity with all.

At Teopoli we are and call ourselves citizens of the City of God.  Jesus Crucified is the King of Teopoli, and Our Lady of Sorrows is the Queen.  Teopoli, as a place of faith, prayer, reconciliation and penance, favours a sincere repentance of all our sins and the resolution to bring about a true conversion in our lives.

Teopoli inspires us to return to the Father with a lively hope of being forgiven and reinstated in the Peace and Love of God and our neighbour.  At Teopoli we concretely experience union with God and with our neighbour because we recognize that we come from a Father who has given us and sustains us in life, so that His glory may be revealed.  At Teopoli we live giving thanks to God for His goodness and mercy, for His love and peace and for His presence in our midst.

The inspiration to erect a cross at Teopoli, amongst its rivers and waterfalls, trees and rocks,  flowers and grass, fish, birds, and beavers, came from Sister Carmelina C.P. The cross is the symbol of our creation and redemption; the culmination of prayer and the sign of love that saves the world. 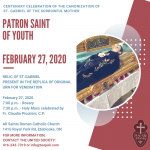 Celebration of Holy Mass to Commemorate the Centenary of the Canonization of St. Gabriel of the Sorrowful Mother (Patron Saint of Youth)