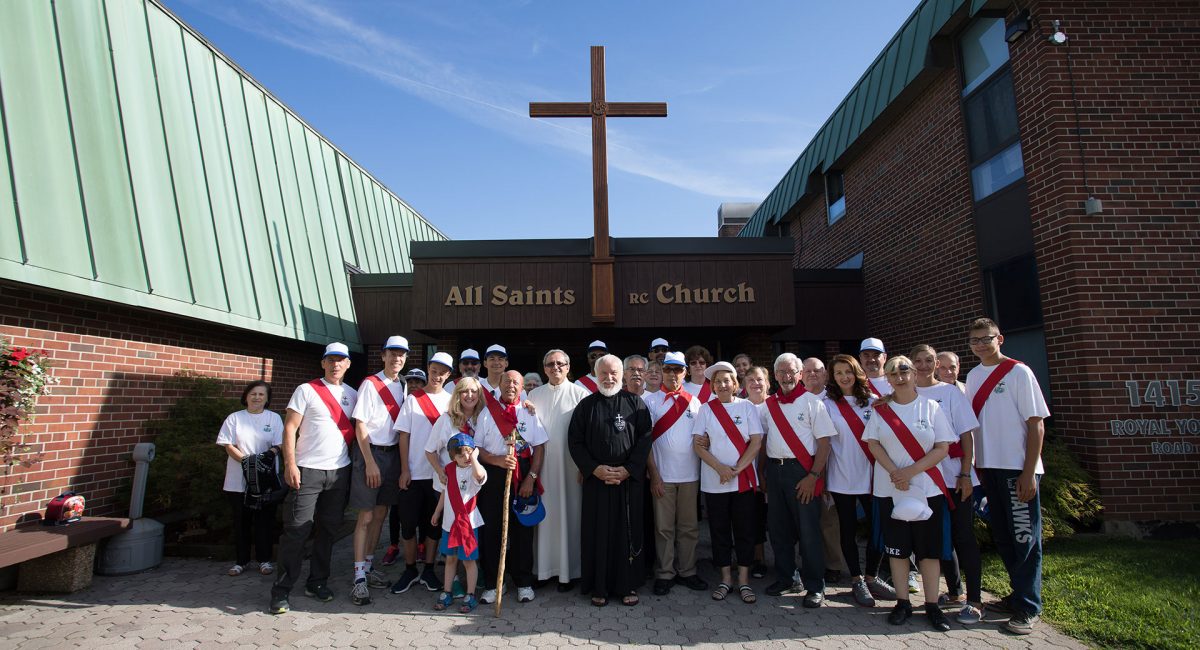 Romeo Meleca with a team of men and women belonging to Società Unita (The United Society), a non-profit charitable mission, will be sacrificing a week of their time, energies and finances on the Pilgrimage from All Saints Church, Etobicoke, to the Holy Cross of Teopoli, Gravenhurst.

Società Unita (The United Society) invites you to take part in this event either by joining the group on the Pilgrimage itself, and/or by supporting it with financial help and your prayers. The funds raised will sponsor underprivileged children to the Teopoli Summer Experience. For more information, please call 416-243-7319.

The History of The Pilgrimage of Love

Romeo Meleca was born in Italy on July 17, 1931, in Siderno Marina in the region of Reggio Calabria.  There were 10 children in his family.  His father, Vincenzo and his mother, Angela worked the land to make a living for themselves and their children.

In April of 1952, Romeo came to Canada following his father and oldest brother who had come the year before in May.  They settled in Toronto and began working on the Canadian railways for a short time.  In 1956, Romeo enrolled himself in a hairdressing course to pursue his dream of becoming a hairstylist, a dream he started to realize before leaving Italy where he was apprenticing as a barber.  Upon completing his training in Toronto, Romeo reached another goal by opening his first hairdressing salon in Newmarket, Ontario.  He continued in this trade up to the age of 70 in 2001, working in his Mississauga location for the last 33 years of his career, despite doctor’s predictions when he was 37 that his career as a  hairdresser would have terminated much earlier due to crippling rheumatoid arthritis.

In 1961, Romeo married his wife Anita, who became his hairdressing partner as well, and they were blessed with two children, Angela and Santina, whom they adore.  Things were moving along well for Romeo and his family as it was for many immigrants who had settled in Toronto.

However, in 1967, Romeo was diagnosed with arthritis.  By 1976, he was walking with the help of crutches.  Romeo considered the physician’s advice and began searching for places for his family to live in Arizona, California, and Florida.  At the end of his search, he decided to remain in Toronto because of his personal desire to remain close to his extended family and friends.  All during this time, Romeo was under medical attention and was taking up to 24 pills per day.  His future was not looking very bright, but Romeo never gave up hope or faith despite the unknown regarding his future.  His job was in danger of being lost since hairdressing requires dexterity of hands and wrists and he would  be on his feet all day;  with loss of job would come loss of income and his ability to provide for his family.

Romeo was determined not to let that happen.  Instead, at the same time, the best of Romeo’s personality came to the surface.  His strength of character and his willingness to make any  sacrifice in order to provide the necessary support for himself and his family were called into action.  Given his temperament, the idea of asking for help from others was not an option.  Meanwhile his wife Anita was Romeo’s right-hand helper and inspiration.  She knew Romeo well enough to understand that Romeo had to do what he felt he needed to do on his own.   By 1980, Romeo remained able to keep his job and managed to continue with his responsibilities.

In March  1980,  Romeo met Sr. Carmelina Tarantino of the Cross, C.P.  She was ill with cancer at Riverdale Hospital in Toronto.  Sister prayed with Romeo and his wife, and the suggestion was made to make a visit to the Teopoli Cross.  Teopoli is a Catholic Spiritual Centre founded by Fr. Claudio Piccinini, C.P., just outside of Gravenhurst, that Sr. Carmelina loved.  Under her inspiration, Fr. Claudio installed a wooden cross in the middle of the field, near the waterfall, on  May 8, 1977.  Since that day thousands of pilgrims have visited what has come to be known as the Holy Cross of Teopoli.  On May 4, 1980, Romeo went to Teopoli for the first time.  It was during this pilgrimage to Teopoli that Romeo decided to stop taking medication for his arthritis.  This was  a bold decision, but it was made out of his faith in God that He would answer his prayers for a cure from his arthritis. This was a defining moment in Romeo’s life.  Romeo knew that God was his only solution, and so he placed himself in God’s hands completely, without reservation.  Romeo was at peace with himself and confident in God’s love for him.  When he stopped taking his medication, he immediately noticed that the arthritis was not progressing.

In thanksgiving to God, Romeo decided to walk to the Holy Cross of Teopoli on a pilgrimage of gratitude for what was taking place in his life.  To date, Romeo has accomplished his pilgrimage to the Holy Cross of Teopoli seven times.  Each pilgrimage has lasted one week.  The first pilgrimage benefited both the Arthritis Foundation and the programs at Teopoli.  He received over $8,000.00 from sponsors.  From that day to the present, the pilgrimages have become a tradition of Società Unita/The United Society, the mission that owns Teopoli.  Many people have joined Romeo in his subsequent pilgrimages, among them people physically challenged as well as youth and seniors, and some even from other countries.  It is Romeo’s hope that this tradition will continue in the future so that others, like himself,  may turn to God in their moments of need and find in the Hands of God his love and mercy.

We find in Romeo, a man who never forgets to express his personal love for God and his gratitude for all the people who have joined him in praising God.  The first time Romeo made the pilgrimage he was 50 years old.  Romeo is getting older, but he is determined to lead the journey to Teopoli as long as he can.  He will continue to walk the approximately 200 km on pilgrimage to the Holy Cross of Teopoli as long as God will allow.

If you were wondering or are so inclined,  Romeo is always looking for new companions to join with him, so if you are interested, do not be afraid to make the phone call and become part of this wonderful history of faith and courage.

It will be an experience of a lifetime!