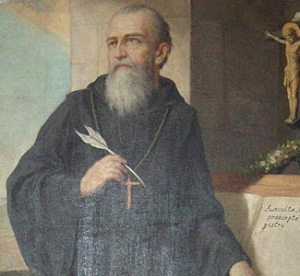 “He who labors as he prays lifts his heart to God with his hands.” – St. Benedict of Nursia

Many centuries ago, there was a man who believed in the power of prayer and of sacrifice.  He combined the two in a very harmonious manner and gave birth to Monasticism in the west.  We now know him as St. Benedict of Nursia.

The most important monastery he founded is Monte Cassino.  From this place, monks, followers of St. Benedict’s way of life, went to all parts of Europe, founding new monasteries and giving a Christian shape to the whole continent after the fall of the Roman Empire and the subsequent barbarian invasion. These men, following the inspiration of St. Benedic are the founders of the Christian west and the Christian Culture that followed. They did it by following the teaching of St. Benedict himself who, as part of the monastic rule, asked the monks to “ORA ET LABORA”, PRAY AND WORK.

The lesson of many centuries ago is still valid today, and at Teopoli there is the desire to put this rule into practice in our lives.  And so, “ORA ET LABORA” has become a way of life for us as well.  For now, a number of men and women, spend two weeks of the year working and praying at Teopoli, reliving the joy and peace that this practice brings into the lives of those who participate.

The Testimony of a Participant

How would an experience that combines the prayer benefits of a retreat, the work and camaraderie of a mission and can be enjoyed as individuals or as a family sound to you?

The cost? Only the gas it takes to get there and the willingness to work and pray.  Housing and Food will be provided.

You are invited to Teopoli, in Ontario, Canada, to experience ORA ET LABORA, which means PRAY and WORK.  The origin of this saying comes from St. Benedict, the founder of Monasticism in the west.  He and the order he founded used this motto to express their complete belief in work that is inspired by prayer.

Father Claudio, a Passionist Priest along with a group of volunteers, have adopted ORA ET LABORA with great humility.  They have recognized its fundamental, spiritual and cultural value which has the power to change the world.

Come and join us on a spiritual journey to Teopoli where you can express your love for the Eucharist and be enriched by experiencing ORA ET LABORA. 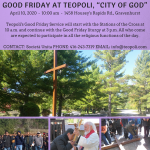 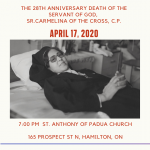